HeavyM’s players are evolving significantly with this new update! Now you have a powerful cutting tool at your disposal.

Basically you can now crop your content directly in the software. No need to do it before! This makes experimenting faster. You can now face all situations and requests from your customers even at the last moment with unoptimised media.

With the “slice selector” module, you can also use a large video and cut out the parts you’re interested in to map to the right places. This works perfectly well for abstract content.

Finally, this new feature is very useful to perfectly adjust a video made from a 2D or 3D model. Very often, there are differences between the basic model and the real set. The warping of the player can help, but for more precision, it is possible to cut the media in small pieces to warp it more efficiently locally ! 🙂

New look for groups management with new creation and control options.
When you click on a group, a “properties” panel opens in the lower left corner. Here you now have control over :

The blend mode with other groups (introduced with HeavyM 2.6)
The opacity
The addition of shaders !!!
The general visual rendering
More specifically, the possibility to add different shaders on the different groups is a huge change awaited from the community! The graphic possibilities increase considerably and will allow to create new animations. 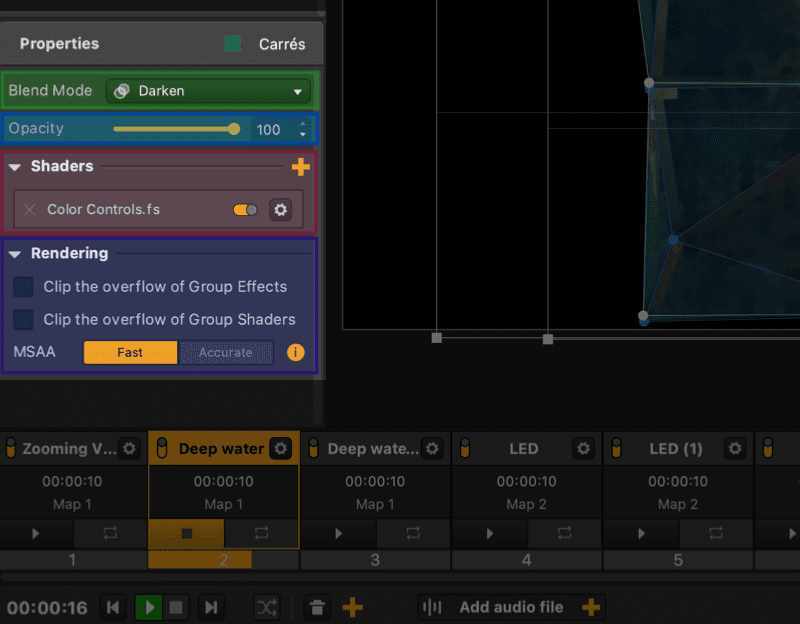 Easily transfer the entire project to another computer

We have revised the whole save management with HeavyM 2.8. Now, when saving, you can select the “collect and save” option.

When you do this, the backup creates a folder that contains not only the .hm but also all the media included in the project. Thus, you get a complete folder that gathers in one place all the elements necessary for the proper functioning of the project.

In addition to allowing a better organization, it becomes very simple to share your project with someone else for a collaborative work.
Finally, it also facilitates the transfer of projects between a work computer and the on-site computer for example.

Add sound to your sequences

In addition to being able to play the sound of one of your media, you can now add an audio file (.mp3 and .wav) to each of your sequences. Set the duration of the sequence to match the music and you’re done!
It is also possible to load a single audio file for all the sequences.

Now, when you drag and drop media into the working canva, a player with the correct ratio is created. This is a huge time saver for your work and you keep the flow in your creation.

Many more options for colors

The color palette gets a facelift! You have more settings and more slots to store your favorites ones. You can now choose colors using HSV, RGB or HEX values.

HeavyM 2.8 now includes a general opacity button to perform a fade to black, for example. You have full control as the button is controllable by mouse, keyboard, MIDI, OSC and DMX.